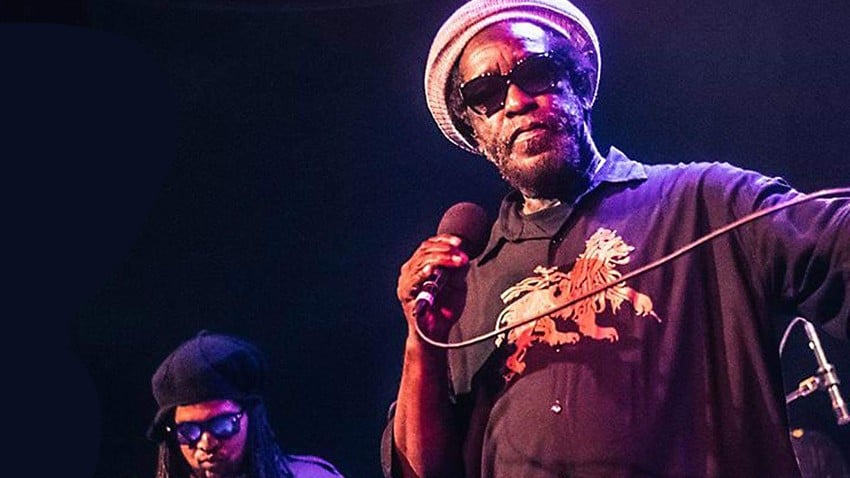 Derrick “Duckie” Simpson the “Gong Gong Gullie” is the founder and leader for reggae’s BLACK UHURU. Although going through numerous lead singers and musicians they have remained to be one of the most recognized and prolific reggae band for over 50 years. The roots of Black Uhuru were formed in Kingston Jamaica’s Waterhouse district also known as “Firehouse” in the early 60′s. Though considered to be one of Jamaica’s toughest neighborhoods its home to several other reggae singers and musicians. It was where Duckie Simpson grew up and learned to sing from boyhood friends Winston “Pipe” Matthews and Lloyd “Bread” McDonald of Wailing Souls and Bob Marley. He recorded four tracks with Wailing Souls before forming his own group.

The original Uhuru’s (Swahili for freedom) were Derrick “Duckie” Simpson, Euvin “Don Carlos” Spencer and Rudolph“Garth” Dennis. They only recorded a few singles “Folk Songs” “Time Is On Our Side” and “Slow Coach” before separating. Don went solo and Garth joined Wailing Souls. Duckie reformed the group adding Michael Rose & Errol “Tarzan” Nelson, both from Waterhouse. They recorded their debut album “Love Crises” in 1977 at Prince Jammy’s famous studio in Waterhouse on St. Lucia Road. It was later re-released as “Black Sounds Of Freedom”. Errol later left to join The Jayes. He was soon replaced by American female singer & dancer Sandra “Puma” Jones. They teamed up with drummer Sly Dunbar and bass player Robbie Shakespeare. Together they developed a musical style full of deep bass thumps, loud drum slaps, sharp keyboards, long instrumentals with guitar riffs, whirly back round noises, echos and the signature”woh oh oh’s” creating their “classic” sound. Producing hits like “I Love King Sellassie, “‘Shine Eye Gals”, “General Penitentary” and “What is Life”.

Black Uhuru released the albums Red, Chill Out, Sensemila and Guess Who’s Coming To Dinner and began to tour the world bringing them to international audiences. It was during this period they started to gain rapid popularity. They opened live shows for the Rolling Stones and the Police. They began to work with other well accomplished producers and musicians. Keith Richards played guitar for the “Shine Eye Gal” track. Dennis Brown “The Crown Prince of Reggae” produced the tracks “Rent Man” and Wood For My Fire”. The track” Spongi Reggae” appeared on an episode of The Bill Cosby Show and “Party in Session” in the movie 1980′s North Shore. BLACK UHURU made reggae history when they won the first ever Grammy Award for reggae music in 1984 for the album Anthem Shortly after the grammy Michael Rose went solo.

Another Waterhouse resident named Delroy “Junior” Reid became the new lead singer. They released two albums Brutal and Positive. The Brutal album was nominated for a grammy. They filmed three music videos for the tracks “Fire City” “Brutal”, and “Great Train Robbery”, that track also played on a popular video game Grand Theft Auto. Sadly in 1990, due to ill health, Sanda “Puma” Jones passed away of cancer. Junior Reid shortly went solo. Then the original three re-united. They released four albums Now, Iron Storm, Mystical Truth and Strong. Each album was nominated for grammy. They made an award winning music video for the track “Tip Of The Iceberg” featuring rap star Ice-T in 1992. Eventually splitting up again. Carlos & Dennis left again & Duckie stayed again. This time there was a lawsuit brought amongst the group over the band’s legal rights in Los Angeles county court. Derrick Simpson won.

As the new millennium approached there came a new lead singer yet again from Waterhouse named Andrew “Bee’s” Beckford. They released two albums. Unification was produced by King Jammy & Dynasty was produced by Fitzroy Francis & Duckie. They went on a worldwide tour featuring Sly and Robbie and had the famous producer Scientist as its road engineer. Andrew Bee’s then went solo.

In 2007 Duckie & Michael Rose reunited after twenty years. They performed in Jamaica and did one international tour and released the single “Dollars”. In 2011 Duckie reunited with Andrew Bee’s after ten years. He added female backing vocalist Kaye Star and began touring again performing in South America & America.

Black Uhuru recently performed in a Broadway Musical. The red carpeted event “Loving the Silent Tears: A New Musical” premiered October 27th 2012 at the Shrine Auditorium in Los Angeles Ca. They were invited to represent reggae music and performed a new track “Make A Deal”. And in Las Vegas Nevada BLACK UHURU was recently honored for its contribution to the entertainment industry. August 31st if now officially “Black Uhuru Day” in the city of Las Vegas.

Black Uhuru’s long success has allowed them to become ambassadors of reggae while earning several achievements in the music industry. With 14 full length albums, 7 instrumental dub albums, and 4 live albums they have the highest record sales in reggae music behind Bob Marley. The album Red was voted #23 for Rolling Stone’s list of “100 Greatest Albums of the 1980′s. Aside from winning the first reggae grammy they have been nominated 5 more times. They are the only reggae group to have won the Diamond Awards of Excellence in 1994.

Despite all of BLACK UHURU’s change of different singers and musicians the one thing that has always remained is Derrick “Duckie” Simpson. Much respect to a legendary figure for Reggae Music. In 2018, Black Uhuru released “As The World Turns” featuring Duckie on lead. In December 2018 “As The World Turns” was nominated for the 61ST Annual Grammy Awards.

In 2020 as the world shut down with the Covid Pandemic, Black Uhuru steadfastly worked on a brand new album titled “New Day” to be released on LAW Records on Sat May 14, 2022.