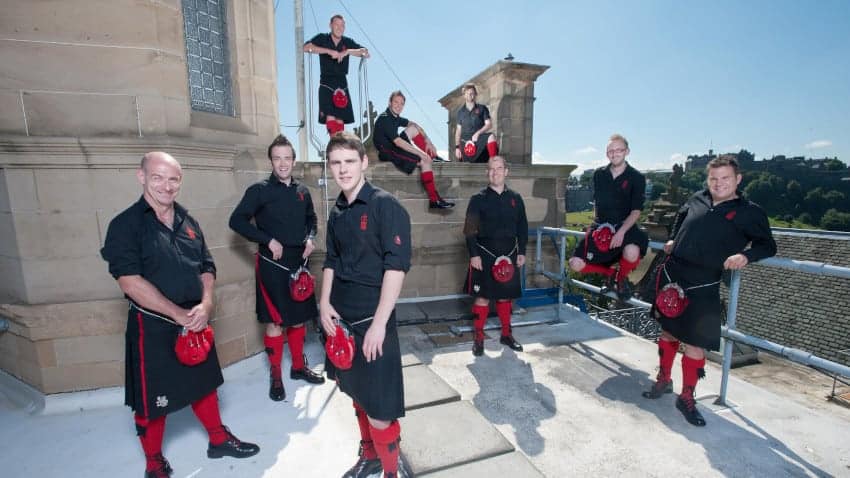 “These are my boys!” exclaimed Sir PaulMcCartney after rocking out to a Chilli performance.

“Awesome!” said film star Ewen McGregor after he guested on drums with the Chillis

“Gotta get me some of that Red Hot Chilli Pipers!  I WANT some!” tweeted actor Samuel Jackson after seeing the band perform on NBC in the summer of 2012

Bagpipes with attitude.  Drums with a Scottish accent. A blazing rock band and show so hot, it carries its own health warning!

It’s Bagpipes. It’s Rock. It’s Bagrock. AC/DC meets the poet Robert Burns. Where rock anthems sit comfortably alongside the great tunes from the glens and the mountains of Scotland.

It’s The Red Hot Chilli PIPERS – (NOT the Peppers!) — a 9-piece ensemble consisting of pipers, guitarists, keyboards, and drummers — who have been rocking the world from New York to Beijing to Melbourne and everywhere in between with musicianship of the highest order and a passion for pipes that will leave you breathless.  The band has four music degrees from the Royal Scottish Academy of Music and Drama and all the pipers and drummers have played at the top level in bagpiping.

Since they walked away with the top prize on the primetime TV talent show, “When Will I Be Famous” in the U.K. in 2007, the Red Hot Chilli Pipers haven’t stopped for a breath, other than to inflate their bagpipes!  Formed in 2002, The Chillis have fast become a global phenomenon, taking their signature ‘Bagrock’ sound to the masses with their unique fusion of rocked up Bagpipes and clever covers of popular songs from all genres.  Their trademarked sound is a unique fusion of traditional pipe tunes – like “The Flowers of Scotland”, “The Hills of Argyll”, and “Amazing Grace” (done Chilli-style, of course!) — and contemporary anthems like Queen’s “We Will Rock You”, “Clocks” by Coldplay, “Chasing Cars” by Snow Patrol, “Let Me Entertain You” by Robbie Williams, and a fantastic rock medley of “Deep Purple”, “Smoke on the Water”, and AC/DC’s “Thunderstruck”.

Fun facts about the Chillis:

The Chillis have never been more in demand for their infectious style of feel-good music which appeals right across the age range to people all over the world.  Theirs are the very best musicians from Scotland and across the globe – many holding World Champion titles and all serious players with impressive credentials and qualifications.   There has never been anything quite like The Red Hot Chilli Pipers.  Feel the Chilli heat:  It’s time to come closer to the fire!