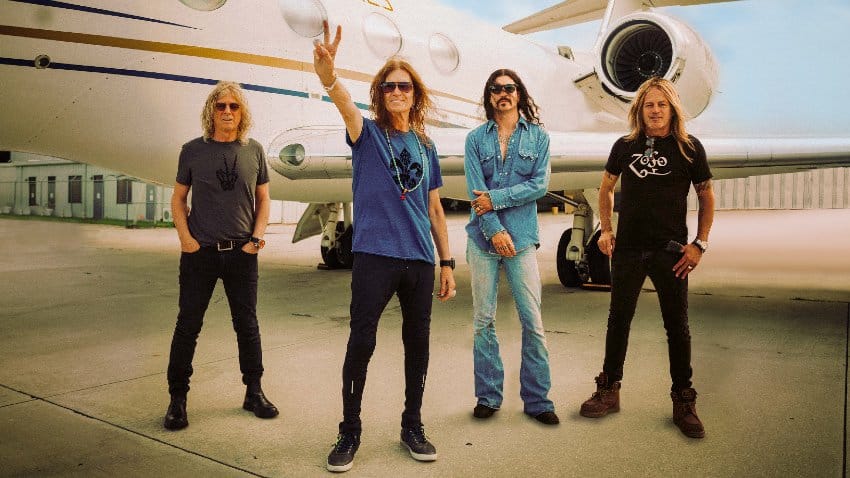 About The Dead Daisies

Rock’n’Roll is a trip, not a destination…we all know how the saying goes!
The Dead Daisies continue their journey towards 2021 with new music, virtual performances and adventures.

The Dead Daisies have gone from strength to strength since the release of their self- titled album in 2013. They have released five studio, one live and one covers album to a growing army of fans worldwide and are praised by the global media in an era where Rock has been declared dead time and time again.

The Daisies have started the next chapter welcoming new band member Glenn Hughes. Also known as “The Voice Of Rock“, Glenn has taken over lead vocals and bass guitar, joining guitarists Doug Aldrich, David Lowy along with the monstrous, hard- hitting, powerhouse drummer, Tommy Clufetos (Black Sabbath, Ozzy Osbourne) who has returned to the line-up for 2021.

With the addition of Glenn Hughes, The Daisies supercharge their front line through his rock solid bass grooves and unmatched vocal intensity. As all fans know, the man is a true original, inducted into the Rock And Roll Hall of Fame, with a rich history of music that features heavy weights like Deep Purple and Black Country Communion as well as a successful solo career. One might say: “They don’t build rockers like him anymore”.

Followers can expect more High-Voltage Rock songs, indomitable grooves and spellbinding lyrics, all the ingredients that have made this music so timeless, out-living trends of the modern day. The sound of The Dead Daisies is entrenched in the Hard Rock way of life we all love but as a living, breathing rock band, they are constantly evolving & bringing new dynamics to a classic style.

They’ve conducted multiple headline tours throughout Europe, Japan, South & North America and conquered some of the worlds’ most prestigious festivals such as Download, Wacken, Graspop, Sweden Rock as well as Woodstock Poland, where they played the notable Concert for Peace with a 60-piece orchestra in front of over 300,000 people in 2017. Significantly, they were the first American Rock band welcomed back to Cuba after the embargo was lifted in 2015.

It’s the uplifting experience of a live show that makes Rock music so encompassing and where The Dead Daisies always deliver. Their concerts are known for creating a special connection between the players and their audience, giving life to each other, singing, screaming and relishing in the moment!!!

‘Unspoken’ was the first single from the new album ‘Holy Ground’. Released in April 2020, the song received global media praise and accolades with a record number of streams on Spotify and plays on YouTube in its first two weeks of release. It definitely broke the silence! This was followed by ‘Bustle and Flow’ in September breaking new ground on the US Classic Rock Chart, the Billboard Mainstream Rock Indicator chart and the Foundations Chart. The third single ‘Holy Ground’ was released on December 4th to immediate airplay on ‘A’ playlists on commercial and digital radio across the globe. ‘Chosen and Justified’, the fourth single from Holy Ground was released on March 5th to immediate airplay around the planet!

In July 2020, The Lockdown Sessions EP was released with four stripped back semi- acoustic tracks, ‘Unspoken’, ‘Fortunate Son’, ‘Righteous Days’ and an amazing version of the Humble Pie classic, ’30 Days In The Hole’ with Glenn and Doug.

The new album ‘Holy Ground’, released on 22nd January 2021, was recorded by Producer Ben Grosse at La Fabrique Studio in the South of France. It features eleven hard hitting songs that through time will stand up as the finest body of work the band has completed to date. Featuring infectious grooves from ‘Like No Other’ to sending chills down your spine in the atmospheric ‘Far Away’, it’s easy to see why both fans and critics are blown away by this album. Returning to the lineup, powerhouse drummer Tommy Clufetos who played on the fifth single ‘Like No Other’ 2021 released on May 7th. He joined the band on their Get Out Of The House US dates in June/July 2021.

The band in conjunction with Monsters of Rock Radio have started a dedicated two- hour radio show called ‘Live from Daisyland’ which airs on Wednesday afternoons at 3pm (PST) and repeated on Sunday nights from 8pm featuring members of the band.

The Dead Daisies are pushing forward, giving energy and taking chances to ensure that every person who experiences them has no doubt that Rock is Indeed Alive & Well and here to stay.

So turn it up, come to a show; enjoy the ride & ROCK with us.

Don is best known as co-host of VH1 Classic’s hit heavy metal talk show series, That Metal Show where legends of rock hang out to discuss their past and current projects in front of a live studio audience. He also co-hosted Beer Money, a fast-paced, non-traditional sports quiz show airing on SNY (SportsNet NY) and is currently hosting his own rock/comedy hybrid That Jamieson Show on CompoundMedia.com.

Amongst his many accomplishments, Jamieson’s 3 stand-up CD’s ‘Live & Hilarious,’ ‘Hell Bent For Laughter’ and ‘Communication Breakdown’ on Metal Blade Records all hit the Top 20 on iTunes and Top 10 on the Billboard comedy charts. He is proudly sponsored by Monster Energy Drinks and True Religion clothing.

Jamieson’s proudest moment is becoming an Emmy Award-Winner for his work on HBO’s ‘Inside The NFL’. Don and long-time comedy partner, Jim Florentine, lent their brand of humor to the popular sports show; writing, producing and performing sports-themed comedy sketches.

The two have also collaborated on the hidden-camera DVD and Comedy Central web series, ‘Meet The Creeps’ as well as a series of prank call CD’s, ‘Terrorizing Telemarketers,’ heard regularly on the SiriusXM comedy channels. He also spent many years as Andrew Dice Clay’s steady opener.

Don’s stand-up act brings his everyday take on life with an added dash of sarcasm for good measure. He’s able to make people laugh at things they wouldn’t normally laugh at and then laugh again at that realization. Besides performing in comedy clubs and theaters all over the country he also performs stand-up on rock tours and at rock festivals such as Rock On The Range, Monsters Of Rock Cruise and Metallica’s Orion Music + More Festival where he was introduced by drummer Lars Ulrich.

About The Black Moods

THE BLACK MOODS play raw, amplified rock & roll and are known for their galvanizing live performance which has seen them appear alongside acts such as The Doors’ Robbie Krieger, Shinedown, Jane’s Addiction, Whitesnake, Collective Soul and The Gin Blossoms.

Born in the Arizona desert and reared on stages across North America, the band delivers a fresh, fiery update of a timeless sound. The trio—consisting of vocalist/guitarist JOSH KENNEDY, drummer CHICO DIAZ and bassist JORDAN HOFFMAN–share a story of success and growth despite a global pandemic and amidst all odds working against them. Refusing to postpone the May 2020 release of their critically acclaimed sophomore album SUNSHINE, THE BLACK MOODS went full steam ahead, marking several career highlights along the way including their first-ever Top 20 Billboard Active Rock charting single, title track “Sunshine,” which peaked at #16,and a cover feature with their hometown local weekly newspaper, Phoenix New Times (May 7, 2020). The album, recorded at a makeshift studio in the band’s rehearsal space with Grammy- nominated producer Johnny K (Disturbed, 3 Doors Down), generated three additional album singles which made the Top 30 charts including “Bad News” (#24), “Bella Donna” (#29) and “Whatcha Got (#30).

While live music was at a halt, THE BLACK MOODS packed up their studio and moved it to the Ozarks, hometown of KENNEDY, and set up their studio in the home of their label owners, Steelhorse Entertainmentwhile reenlisting Johnny K. to track their next full-length release due later this  year. During this time, the band also remotely recorded a single with legendary producer Eddie Kramer (Led Zeppelin, The Beatles), released a heartwarming music video for their ballad “Home” and shared a fiery cover of their idol Tom Petty and the Heartbreakers’ 1978 track “I Need To Know,” which received airplay on SiriusXM’s Tom Petty Radio show.

About Honor Among Thieves