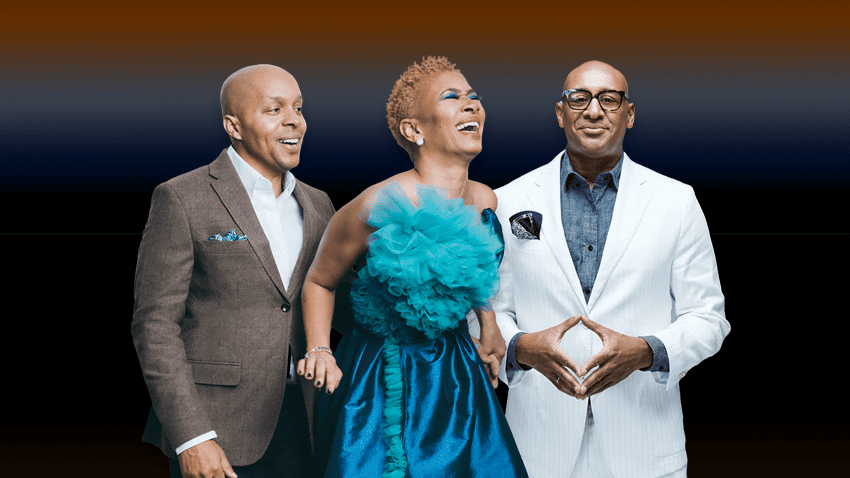 About The Baylor Project

A husband. A wife. An astonishing duo built on love, family, faith, culture and community.

These are the things that power The Baylor Project featuring Jean Baylor and Marcus Baylor. This enticing collaboration is steeped in the heart and soul of jazz. As the children of Pastors, Marcus and Jean’s musical roots were planted deep within the church, and it was there that the road was paved for the influence of jazz, gospel, blues and soul to make its mark. Their debut CD “The Journey”, released on their own label, Be A Light, topped the Billboard Jazz Chart at Number 8 in 2017 and a year later garnered 2 GRAMMY® Nominations for Best Jazz Vocal Album and Best Traditional R&B Performance.

Two years later during one of the most challenging years in recent history, The Baylors released their single, “Sit On Down” in 2020 which earned a 3rd GRAMMY® Nomination for Best Traditional R&B Performance, solidifying The Baylor Project as an undeniable force. Their second album, “Generations,” released in 2021 earned the duo its first NAACP Image Award Nomination for Outstanding Jazz Album-Vocal and it’s 4th GRAMMY® Nomination for Best Jazz Vocal Album. “Generations,” a cultural anthology rooted in everyday life experiences, becoming the #1 jazz vocal album on the JazzWeek radio charts and the standout song “We Swing (The Cypher)” was named among NPR Music’s 100 Best Songs of 2021.

Marcus and Jean Baylor signed an exclusive distribution agreement in partnership with their artist-owned label, Be A Light, with Motown Gospel (a division of Capitol CMG/Capitol and Universal Music Group) making The Baylor Project’s catalogue available for the first time across all streaming platforms. Jean, a “Jersey Girl”, was introduced to jazz in college as a Vocal Performance Major at Temple University, where she was heavily influenced by artists such as Carmen McCrae, Jimmy Scott, and Shirley Horn. She subsequently made her mark as one-half of the platinum recording duo, Zhane’. In time, Jean grew into a composer, arranger, producer and bandleader. She has been a featured guest artist on performances and recordings with artists including Yellowjackets, Kenny Garrett, Marcus Miller and legendary bassist, Buster Williams. Well-equipped with an agile mezzo-soprano range, Jean combines a fresh, whimsical approach to phrasing with clever improvisation resulting in singing of such vocal purity that she embraces the soul.

Marcus, a St. Louis native, is widely recognized as the former member and drummer of the GRAMMY® Award winning jazz quartet, Yellowjackets. While attending The New School for Jazz and Contemporary Music, he began touring and recording with Cassandra Wilson and went on to work with artists including Kenny Garrett and John Scofield. Since then, Marcus has come into his own as a composer, arranger, producer and bandleader. With his natural feel, creative use of space and innovative ability to tell a story, his musicianship and improvisation are those of a seasoned musician.

Marcus and Jean’s combined musicianship is unmatched. Their dynamic performances are soulful to the bone. The Baylors’ will raise you up and inspire you to clap along with them, as they entice your ears with a swinging mid-tempo tune. Yet, at a moments’ notice, you may be moved to tears when they change the atmosphere with a spiritual song that will stir the emotions. They perform original compositions and new arrangements of classic pieces. They utilize sincerity and maturity far beyond their years to deliver ballads with storied grace, elegance, and grit. And what’s more is that Marcus and Jean have the uncanny ability to bridge the gap between generations. They are relatable, they are virtuosic, and for these reasons they captivate packed houses and sold out audiences.

The Baylor Project pays homage to their wide-ranging musical influences, and in doing so, generate an eclectic sound whose overall effect is spiritual, buoyant, feel good music. Soulful. Melodic. Authentic. The Baylor Project. “Married musicians vocalist Jean Baylor and drummer Marcus Baylor have created a captivating “project” that meets at the 3-way intersection of Jazz, Gospel and Legacy. Brimming with aural snapshots of their individual roots and the sacred space where they come together, it is a very unique album that soothes the soul…”

The modern Gospel messenger is an evolved one. He is informed and sophisticated in thought, continually negotiating between humanity’s immanence and the behest of eternity. He realizes the recognition of either and does not negate the other. Instead, doing so helps form the depth and complexity of the message needed to reach and aid the masses. Brian Courtney Wilson is a chief example of the former, and his latest musical offering, Still, is a sound embodiment of the latter.

Since his debut release (2009’s Just Love), Wilson has delivered some of the most beloved songs of the past decade and has established himself as one of our time’s premier male inspirational voices. His signature and impassioned vocals are an homage to the myriad of his musical influences, which include Donny Hathaway, Stevie Wonder, Marvin L. Winans, and Fred Hammond, to name a few. A graduate of the University of Illinois, and a former corporate pharmaceutical representative, Wilson is a critical thinker whose approach and presentation of Gospel ministry is equal parts anointed and erudite. Still, Wilson’s fifth studio album is perfectly suited for release amidst some of the most uncertain and questionable modern times. Acknowledging anxiety, frustration, and fear, inevitably compounded by current events, yet doing so through a lens of hope, Still artfully navigates the spaces between fact and faith.

The most apparent demonstration of this is Wilson’s masterfully reimagined interpretations of two well-known songs, which seemingly serve as thematic bookends of sorts. There is “Inner City Blues (Make Me Wanna Holler),” where his angst-tinged tenor interprets lyrics sung originally and co-written by another inspiration, and prolific emissary of his day, Marvin Gaye.

Hauntingly, the lyrics – rife with societal ills, political discord, and economic disparity – hold just as much poignance and relevance as they did at the time of the song’s original bow, nearly 50 years ago. However, Wilson’s artistic pendulum swings from a position of cultural awareness and responsibility to a posture of prophecy and hope, in the form of The Winans’ crossover classic, “Ain’t No Need To Worry.” Wilson’s cover pairs him with the dynamic and vocally agile Maranda Curtis. The result is a soothing and sage reminder of the eternal hope we have in Christ.

While the two most familiar songs lean towards what seems to be opposing ends of the faith spectrum, perhaps equally as notable about Still is its attention to the varying degrees between the two. The balance between the songs speaks to the core of people vacillating between what we see, what we feel, and what we believe.

“Waiting” was co-written by Grammy®-nominated, Soul/R & B recording artist and fellow United Tenors alumnus, Eric Roberson. It encourages the listener to recognize answered prayers. And even when they look, or feel, differently than imagined, not to overlook them while in pursuit of those not yet manifested.

“Forever,” and “Sure As,” also co-written by Wilson, address God’s unwavering and never-ending sovereignty, and commission the listener to assume a similarly perennial stance of praise and worship towards Him. Wilson solely penned the title track, “Still,” and “Merciful And Mighty.” “Still,” plays like an earnest prayer, and a commitment to be resolute in the midst of your circumstances. Contrary to popular opinion, Wilson clarifies that stillness does not translate to apathy. He offers, “Being still doesn’t mean you don’t do anything. To be ‘still’ is the act of tempering any anxiety long enough to do what it is that you are called to do, fulfilling the assignment(s) on your life, doing your work… and with just as much confidence and resolve, trusting God to handle what you can’t.”

“Merciful And Mighty” further expounds upon existential complexities and nuances, this time in reverence of two of God’s divine attributes. In it, Wilson seems to refute the notion that to extend grace or mercy is a sign of passivity or weakness. Instead, he establishes a correlation between mercy and might. He says, “I wanted to communicate that the reason God is who we acknowledge as God, is because He paid a great price to do it on Calvary…and that price was mercy towards us. He is powerful enough to show grace.”

In a first-time collaboration, Wilson joins forces with Grammy®-nominated Christian songwriter, Jeff Pardo (Jesus Culture, Tauren Wells, Francesca Battistelli), on “Fear Is Not Welcome.” Pardo penned the song after a conversation during which Wilson shared his heart and conveyed what he wanted to say to God’s people at this time. The result is an anthem of admonition renouncing fear and each of its derivatives – and instead, extolling joy, peace, and protection.

Wholly, Still is purposeful and timely. It expands our view of Wilson’s heart and demonstrates his desire to uplift and uphold his fellow man. It continues to solidify Wilson, simultaneously, as a voice of the people, and for the people.