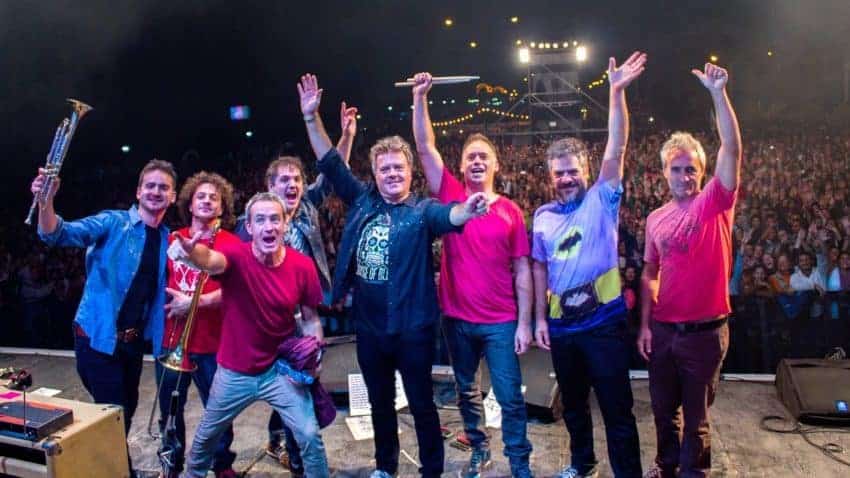 In 1986 a group of friends who used to get together to play music, became LOS PERICOS, the first REGGAE Rock band in Argentina. Their first record, “LOS PERICOS” released in 1988 was the best selling album of the year, obtaining Triple Platinum Award for its 180 thousand units sold. Their 4th album, BIG YUYO, was launched in 1993, causing a surge of popularity across Latin American countries In chartering successfully.

In 1994 they performed again in the INTERNATIONAL FESTIVAL REGGAE SUNSPLASH and closed the WORLD BEAT NIGHT. Rita Marley invited them to the TUFF GONG RECORDS studios, where BOB MARLEY used to record. With the release of PAMPAS REGGAE, tours across Latin America and the sales of their records continued to increase. In March 1997, PERICOS was the only Latin America band invited to participate in the reggae tribute to The Police and recorded, together with STEWART COPPELAND: DARKNESS, included in Regatta Mondatta album. They also participated in the latin tribute to The Police: Outlandos D´America.

1998 started with a couple of shows across Central America and Venezuela with a live concert in MARGARITA ISLAND for 140,000 people and a performance with a record audience of 180,000 people at the FESTIVAL EXPERIENCIA ROJA in CARACAS. 2000, LOS PERICOS gave a show at RIVER PLATE STADIUM celebrating THE NEW MILENIUM for an audience of 75,000 people. In 2004, the Argentinean band with 17 years of successful path, surprised it’s fans by changing their vocal scheme; with Juanchi Baleiron switching from lead guitar to vocals. With a completely fresh approach, fuelled by the beginning of a new stage of change and challenge, they presented a live show with a more compact scheme, reinforcing their reggae-rock format.

In August 2005 the band released it’s new album called “7” with performances across Latin America. In 2007 the band went on one of it’s most important tours celebrating 20 years together. They performed in México, Uruguay, Ecuador, Puerto Rico, USA, Venezuela, Canadá, Bolivia, Colombia, Chile, Salvador and Perú; more than 140 shows in a year. During  2008 they recorded and released the album ‘Pura Vida’. They performed presenting this new material through all the region, starring in  Pepsi Music Festival in Buenos Aires for a 50,000 audience.

In 2010 they released the studio recording PERICOS & FRIENDS: a compilation of hits joined by some of the biggest stars in reggae. Including performances by Ali Campbell, Gregory Issacs, Toots Hibbert, and The Skatalites among others. This award-winning record went GOLD due to it’s success in sales and has been highly acclaimed by critics for it’s quality. In 2012 LOS PERICOS became the first Argentine band to perform in the iconic Rock in Rio Festival in Lisbon, Portugal.

In the last few years they have performed in the most important Latin American festivals including Vive Latino , Corona Music Fest in Mexico City, Rock al Parque in  Bogota. 2016 They released SOUNDAMERICA , with the best reviews ever, demonstrating the maturity of 30 years together.