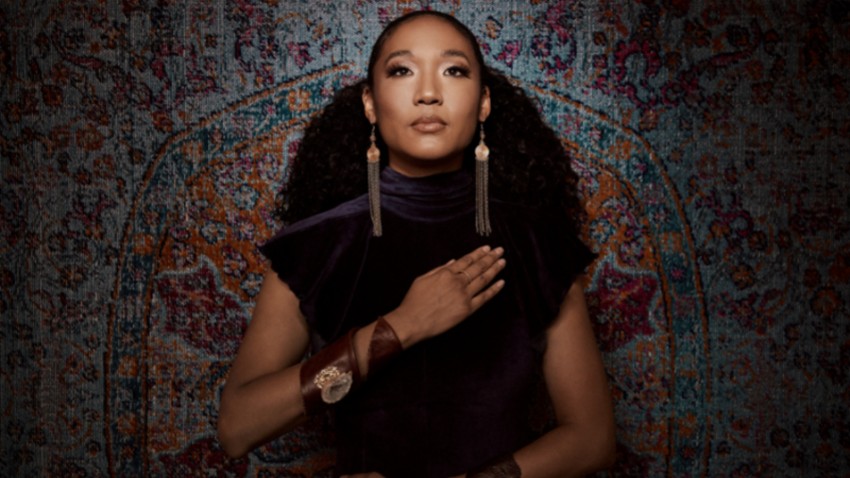 On her latest LP Baby, I’m Hollywood, Judith Hill unveils an ambitious, kaleidoscopic document detailing her journey of self-discovery. The 13-track record is set for release in March 2021; it’s a vibrant, defiant personal statement, a thorough excursion into the annals of Black music: past, present and future. Rich in throwback soul, stunning piano balladry, and swaggering psychedelic funk, the self-produced Baby, I’m Hollywood finds Hill liberated, focused and reborn. Bolstered by a spirited live band and her new attitude, she ruminates on pleasure, pain, celebration, and consequences, all of which inform this collection of finely-crafted stories-in-song.

“I wanted to personify Hollywood as a woman who’s a survivor. In my career, I’ve been through so many peaks and valleys, and the show must go on. The message is being persistent, bringing all of your pain and your story to the stage”, notes Hill.

Hailing from Los Angeles, CA, Judith Hill comes from a Japanese/African-American bi-racial musical family. Mother Michiko and father Robert (aka Pee Wee) met in a 1970’s funk band, and continue to perform in Judith’s backing ensemble, their contributions heard all over Baby, I’m Hollywood. After graduating from Biola University with a degree in Music Composition, Hill took off for France in 2007 to join French superstar Michel Polnareff’s touring band. Inspired upon returning to the States, Judith embarked on a meteoric ascent to soul singer, songwriter, and badass bandleader.

In a prolific, decade-long dream sequence, the singer collaborated with iconic artists across multiple platforms, genres and mediums. Hill was selected to duet with the late Michael Jackson on “I Just Can’t Stop Loving You” during his This Is It concerts in London. After his sudden passing in June 2009, Hill sang lead on a number at Jackson’s memorial service, putting her on the worldwide map in an instant. Judith’s rise to fame is explored in 20 Feet from Stardom, the documentary narrated by Morgan Freeman, where her performances helped win a Grammy for Best Music Film.

Hill was wildly-popular on the fourth season of hit TV show The Voice, she’s worked with filmmaker Spike Lee, and sang on the official soundtrack to major motion pictures Dr. Seuss’ The Lorax and Happy Feet Two. Hill contributed to jazz luminary George Benson’s tribute to Nat King Cole. Among other high-profile engagements, Judith was drafted as direct support on arena tours for both John Legend and Josh Groban. The latter invited Hill onstage each night to perform duets, before the pair released the single “Remember When it Rained”.

After discovering the singer on Revolt TV, where she spoke aloud her wish to work with him, Prince summoned Hill to his famed Paisley Park compound. Together they recorded her debut full-length solo album Back in Time, a promising project that the dearly-departed genius both produced and played on. Hill received much critical acclaim in the aftermath of the record’s 2015 release; a couple of years later she followed up with a self-produced sophomore LP, Golden Child.

In addition to her prodigious list of collaborators, Judith namechecks an eclectic smattering of inspiration and influence, including Frederic Chopin, Antonio Carlos Jobim, Aretha Franklin, Nina Simone, Tata Vega, the Clark Sisters, Jimi Hendrix and Stevie Wonder. One can pick up on their nuanced expressions within the fabric of her sound and style. Yet on Baby, I’m Hollywood, the singer arrives right on time, proudly cut from her own cloth, and firmly entrenched in her funkadelic universe.

“Baby I’m Hollywood is about acceptance…. coming to terms with my story and unapologetically stepping into who I am.  I want to bring people inside MY soul and help them see past the makeup, stage lights, rumors, and history…..To step out of the shadows of fear and into the light of vulnerability,” said Hill Judith Hill’s fantastic voyage springs to life on the title track’s freewheeling 60’s soul revue. “Americana” is a syncopated stomp that boasts 808 high-hats and an iridescent soundscape. “You Got the Right Thang” and “Step Out” channel psychedelic 70’s funk, with subtle nods towards Minneapolis. Plus potent blends of smokey soulful blues, sizzlin’ R&B slow jams, stirring Gospel-swells and crunchy guitar grooves, all masterfully sewn together by Hill’s scintillating vocals and enigmatic personality.

Veronica Swift is a Mack Avenue recording artist who’s debut album “Confessions” was released in 2019. Her second release,  “This Bitter Earth” (2021), earned her a five-star review in DownBeat magazine including the front cover on their November 2021 issue, the JazzTimes December cover, and L’academie du Jazz “Best Vocal Album” award in 2021.

Having made her mark on the international jazz scene as one of the star vocalists of her era, Veronica Swift has now expanded her style, establishing herself as a skilled rock and soul singer as well as a dynamic performer. Her third album “TransGenre” (2023) will venture into mixing jazz and classical with rock, soul, and funk paying homage to greats like Janis Joplin, David Bowie, Jimi Hendrix and Duke Ellington. Veronica’s ability to transcend different styles, and fully embody them with authenticity to tell a story makes her one of the most skillful singers in any genre, and displays her theatrical approach as a performer and artist.

Raised in Charlottesville, VA and having grown up on the road with her parents (jazz pianist Hod O’Brien and vocalist Stephanie Nakasian), Veronica began her performing and recording career at age nine.  As a child, she headlined at Jazz at Lincoln Center’s Dizzy’s Club, and appeared at major US festivals such as the Telluride Jazz Fest.  She went on to receive a Bachelor of Music Degree from University of Miami’s Frost School of Music.

Placing 2nd in the 2015 Thelonious Monk Jazz Competition put Veronica on the map, contributing to her landing a weekly residency at the historic jazz venue Birdland.  It was there where she captured the attention of jazz icons Chris Botti and Wynton Marsalis who featured her on their tours throughout the following years as Veronica also toured extensively with her own band.

“Swift gets both dramatic and slyly witty, taking on sexism directly with her unrestrained makeover of ‘How Lovely to Be a Woman’…” — Glide Magazine

“It’s as good a job of reconciling the past and the present as I have ever heard, and goes a lot further than anything else I’ve encountered in the past 12 months toward making sense out of a world gone wacko.” — Wall Street Journal

“Veronica Swift is a woman of many voices, and she uses every one of them to refract a dizzying kaleidoscope of moods on ‘This Bitter Earth…’” — DownBeat

“‘This Bitter Earth’ is more universally-minded as she tackles sexism, racism, domestic abuse and other social issues via carefully curated materials.” — Jazziz

“…recontextualizing decades-old lyrics has led the Charlottesville-bred jazz vocalist to a point of historical confluence, one where classic songs now take on a renewed relevance.” — The Daily Progress

“…it takes an artist of sure and rising stature to curate one hell of a coherent protest album.” — All About Jazz

“…a jazz lioness with a pure tone, large lungs, a knowing sense of repertoire, and sure swing style.” — JazzTimes

Singer/songwriter Taylor Rae walks through life projecting a calm self-awareness. And, while there is an aura of purposeful intent in every stride she takes, every note she sings and every chord she plays, there is also a sense of natural ease in every action. This is some still water – and it runs deep.

In 2017, Taylor won Santa Cruz NEXTies Musician of the Year Award and the next year she struck out for Texas, landing in the musical wonderland of Austin. Since then, Taylor has performed at the legendary Austin nightspot Stubb’s second stage, Nashville’s renowned Bluebird Café, Lexington’s The Lyric Theatre and the Asheville, NC Isis Music Hall. She has shared the stage with a variety of artists including Brandy Clark, The Stone Foxes, Kristian Bush and Reggae musician Mike Love.

Taylor sang her first song, a cover of Carole King’s “It’s Too Late” at the age of two. She wrote her first song at eight, and by age 10, she had filled entire notebooks with her original lyrics. Taylor was inspired not only by the natural surroundings of her youth, but also the music of Bonnie Raitt, King, Janis Joplin, Sheryl Crow, Norah Jones, Jewel, Simon & Garfunkel and Steely Dan, among others. Knowing what her future held, Taylor taught herself guitar at 12 and, by age of 15, played her first paid gig. Since then, she has lived a nomadic life, coloring a bit outside the lines, and exploring the ever-evolving definitions of Americana, Folk, Jazz and Blues – and the vagaries of the human condition. She has earned comparisons to Jones, Maren Morris, Joss Stone and Grace Potter.

Taylor’s Top 20 Americana Music Album Chart debut, Mad Twenties, is the culmination of a gently chaotic decade lived with fearless determination, and Taylor shows a sophistication and maturity beyond her 28 years with this collection of 12 originals. Produced by William Gawley, the project runs the gamut from gentle, acoustic Folk to Led Zeppelin-tinged Rock and roadhouse Blues, while also incorporating Jazz and psychedelic influences.

No Depression says that “The album introduces a singer fully in command of her vocal gifts and a songwriter who enfolds her lyric sensibility in haunting musical sketches.” It is an apt description for a largely chronological concept album. Taylor’s incisive lyrics cover a broad emotional landscape, describing a blossoming – then withering – romance in stunning confessional detail. The gently rolling opening cut, “Window,” inspired by a psychedelic experience, affords the first inviting glance into the real-life relationship on which the majority of songs are based, while the sweetly romantic first single, “Fixer Upper,” offers a dreamy optimistic view forward. The paths of touring musician and romantic partner converge in the free-ranging, B3-laden “Home on the Road,” an Americana Music Chart Top 15 single. Taylor’s vocal prowess for searing Blues/Rock is demonstrated in the electrifying “Forgiveness.” Other highlights include the raw, edgy vibe of the politically charged “Never Gonna Do” – a brief but compelling detour from the album’s autobiographical element. The collection closes out with “Taking Space,” a darkly bittersweet epilogue to the love story.

“Recording the album was very cathartic; it reflects my own personal journey of self-actualization, awareness and growth,” admits Taylor. “It’s easier to look back on this journey and relationship with gratitude now.”

Since the release of Mad Twenties, Taylor’s journey has found her touring non-stop in support of the album, doing countless live shows, podcast interviews, and radio and television appearances to bring her to audiences and critics alike. High profile appearances include Circle TV, Ditty TV, Woodsongs and Mountain Stage.

When Taylor is not working on music, she enjoys reading, practicing yoga and spending time with her long-haired dachshund, Winnie.