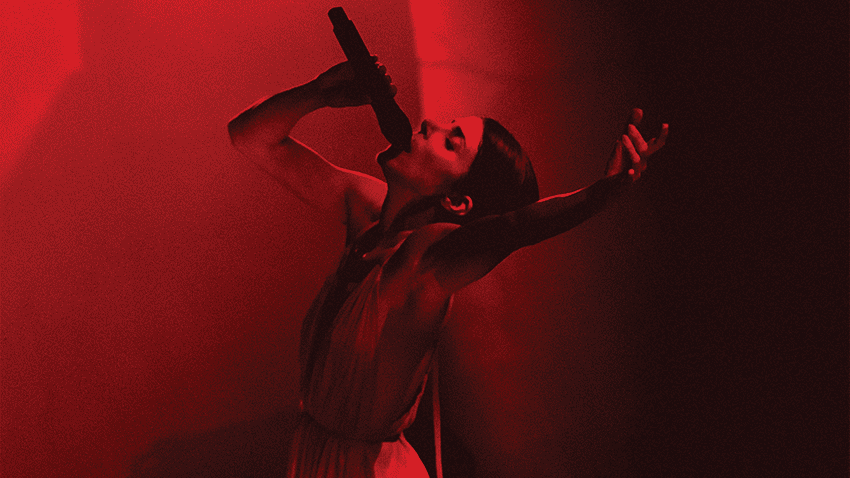 Ely Guerra (born Elizabeth Guerra Vázquez, February 13, 1972) is a Mexican singer-songwriter who was raised in Monterrey, Nuevo León, Mexico. The daughter of Alberto Guerra and Gloria Vázquez, Guerra lived the first years of her life in Monterrey, where she was born, before moving to San Luis Potosí and then to Guadalajara, due to her father’s work. It was in Guadalajara that she first discovered her passion for music. She has a mezzo-soprano voice.

Guerra wrote her first song at age ten. She attended school at the Evergreen State College in Washington. In 1986, Guerra was the backing vocalist of the band Carmín. At the age of fifteen, she decided to follow her dreams and look for opportunities in Mexico City. At age 20, she signed her first contract with BMG. Recorded in Spain and produced by Teo Cardalda, her debut album Ely Guerra was released in 1992. However, the album failed to achieve the expected success. After finishing her contract with BMG, Guerra signed with another record label, EMI. In 1996, Guerra moved to London to work on her next record with Scottish producer Sandy McLelland. Her second album, Pa’ Morirse de Amor, was released in 1997. “Ángel de Fuego” and “Peligro” were released as singles to promote the album.

In August 1998, Guerra and Julieta Venegas appeared on the cover of Time’s Latin American edition and were named “The Most Promising Performers in the Mexican Rock Scene.” Recorded in New York and produced by Andres Levin, her third album, Lotofire, was released in 1999. The album spawned three singles, “Tengo frío,” “Yo no” and “Vete.” Twenty years later Milenio would state of Lotofire’s legacy that it is “the finest album that had been produced in Mexico so far.” In 2001, Guerra contributed a cover of “La Tumba Falsa” to the Los Tigres del Norte tribute compilation El Más Grande Homenaje a Los Tigres del Norte. In 2002, her albums Pa’ Morirse de Amor and Lotofire were re-released. The same year, Lotofire was edited in the United States by Higher Octave.

The label also released a 12″ compilation of remixes titled The Lotofire Mixes. A 2003 compilation EP titled 4 was released in Argentina and Chile. It contained songs from Pa’ Morirse de Amor and Lotofire.

Guerra left EMI and created her own record label, Homey Company. In 2008, she started working on her next record. She asked several male musicians to send her a harmonic sequence that she would use as a base to compose the songs for the album. Some of the collaborators were Enrique Bunbury, Juanes and Gustavo Santaolalla. Her fifth album Hombre Invisible was released in 2009. In October 2010, it won the award for Best Alternative Music Album at the 11th Latin Grammy Awards. Hombre Invisible was also nominated for Best Recording Package.

The same year, Guerra released a version of the popular song “La Llorona” on the album Bimexicano, Nuestros Clásicos Hechos Rock. In the fall of 2010, Guerra appeared on the cover of T magazine. In October 2011, she sang the “Himno Nacional Mexicano” in the Pan American Games closing ceremony. A jazz version of Hombre Invisible, titled Invisible Man, was released on November 22, 2011. In November 2012 Guerra participated in a tribute to Chavela Vargas with Eugenia León and Tania Libertad. The event took place on November 27 in Carnegie Hall and on December 5 at the Walt Disney Concert Hall.

During February 2013, Guerra released her first live DVD, Ciclos, recorded live at Mexico city’s Teatro Metropólitan on December 9, 2011. On July 29, it was confirmed that Guerra had finished production of three tracks for her new album. A year later, in July 2014, she released the live album El Origen.

She was a guest judge on Season 3, Episode 5 of the reality television series Project Runway Latin America, where the goal was to design an outfit for her. She also performed her song “Mi Playa” at the beginning of the episode.

Ely Guerra was named a UC Regents’ Lecturer for 2015-2016. As part of this she visited a Spanish 150 class at UCLA in 2015. “[She] is an internationally acclaimed artist whose artistic and intellectual interests include literature, film, art and fashion, and who has used them all for positive statements on women’s independence and creativity,” said Professor Héctor Enrique Calderón Valle, chair of the Department of Spanish and Portuguese, who hosted her in his class.

Guerra released her album Zion on September 23, 2019, to excellent reviews.