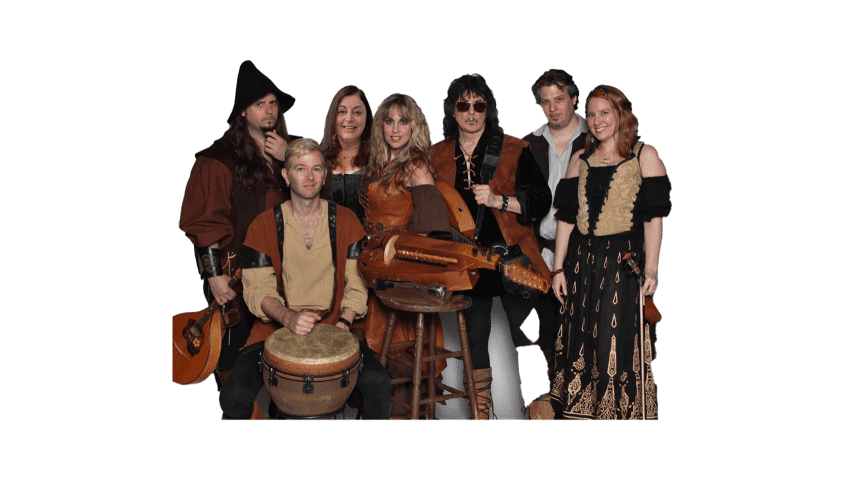 The year is 1996. The setting: a snowy winter in Massachusetts. Inside a lodge, nestled around a fireplace, a guitarist plays some beautiful acoustic tunes, and a singer with an ethereal voice joins in. They play throughout the night, creating songs of myths and fantasy inspired by nature. All of this is occurring while the guitarist, none other than famed string smith Ritchie Blackmore, is working with his band Rainbow to record their last CD Stranger In Us All.

Here, in this moment miles away from it all, Ritchie Blackmore and Candice Night are using their secluded time around the fire in the middle of winter to create, some beautiful music, a new genre, inspired by many melodies of the Renaissance period, and Blackmoreized into contemporary music. They call it Renaissance/Folk/Rock. This is the sound of Blackmore’s Night.

In 1997, Blackmore’s Night released their debut CD Shadow of the Moon, which immediately went gold in Japan and earned awards worldwide. Meanwhile, their ever-growing, devoted fan base is growing, as the band has created a genre of music for all ages. From grandparents to children,  everyone is embracing their medieval mood music and gypsy dances. Clearly, the music of Blackmore’s Night connects with fans on a deep level, allowing them to experience an entirely different era of merriment.

Additionally, every one of Blackmore’s Night’s studio CDs (10 in total) has debuted in the top five of the Billboard charts, many of which entered or remained at the number 1 spot. They have earned Awards such as “Best Album of the Year” or “Best Vocal Album of The Year” and their sold-out live concerts in castles and UNESCO sites worldwide are filled with thousands of fans dressed in Renaissance garb, dancing and singing as if time stood still. No clocks…no pressure…just the gaiety and camaraderie of a medieval pub. Everyone joins in and loses their stress in the music.

Their latest release To The Moon And Back: 20 Years And Beyond… (due out on August 18) is a best-of compilation including the most-requested and beloved songs from their fans, all of which have been re-mastered. Alongside these classics, the album includes four re-recorded new versions of some of their favorites: “Moonlight Shadow”, “Somewhere Over The Sea”, “Coming Home”, and “Writing On The Wall”. Additionally, the set has a live version of “Home Again” and three brand new songs: “Ghost Of John” (which includes the vocal debut of Blackmore and Night’s 6-year-old daughter Autumn), Ritchie Blackmore’s new version of “Land of Hope and Glory” and Candice Night lending her vocals to a favored Rainbow tune “I Surrender”. The set is complete with a booklet boasting a collage of 20 years of memorabilia and a small unrehearsed video from a sound check, rewarding fans with an intimate glimpse behind the scenes.

Grab your tambourine or your tankard of ale, and sing and dance with Blackmore’s Night “Under A Violet Moon.” Join us To The Moon and Back: 20 Years And Beyond… for an amazing collection of music from Blackmore’s Night.