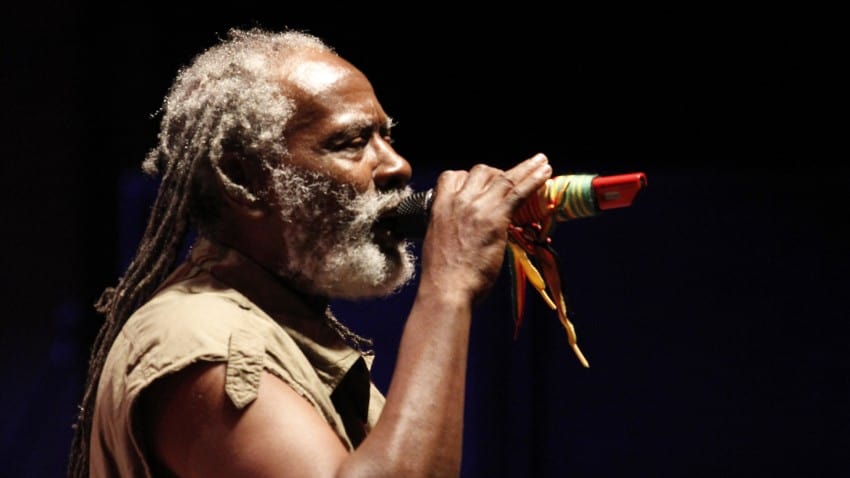 This show takes place at SummerStage in Central Park

Winston Rodney, AKA Burning Spear, originated in the parish of St. Ann’s in the year 1945. The name Burning Spear originated from the first President of Kenya, Jomo Kenyatta.

The spear has been burning from 1969 until this time… Rastafari.

Along the way, recognition belongs to Jack Ruby as one of the original producers.

Another connection on the other side of St. Ann was his brother Robert Nesta Marley, whose influence directed Spear to Studio One. The rest is history… (Maximum respect to Mr. Marley.) To hear Winston say it, Bob told him to go to Studio One.

Numerous albums later, as well as lots of struggle to be independent, Winston is here.

He has toured the world, won two Grammys, and received the OD officer class in Jamaica.

The teaching of the Honorable Marcus Mosiah Garvey had a great impact on Spear, and he has paid tribute to him on numerous occasions in many of his songs. “Marcus Garvey words come to past.”

Spear will tell you today that we need to start the Marcus Movement and declare a national holiday for Mr. Garvey as well as to educate the younger and older generation about him, his contributions and his legacy.

Spear was happily retired and doing charity work when he did an interview with Amy Wachtel, aka “The Night Nurse,” and his grandniece Kayleigh Harvey, and they both asked him the same question – when will he tour again? To hear Winston say it, “Man, this was not a part of the plan,” but his fans asked him to do a fan appreciation tour and he complied.

Spear believes in helping those of us that are in NEED. Not the ones that want. Hence, he always donates and supports “The Spread the Love A Move” charity that was founded by Zazan Zazan Loud. They have collaborated and distributed meals to some of the homeless in St. Ann’s Bay and Ocho Rios, and he has helped with donations to the wonderful residents of Train Line in Portmore, donations of gifts for the children in St. Anns Bay hospital last Christmas, and Christmas dinner for the entire Infirmary in St. Ann’s Bay. In addition, the plan is to continue to “help each other along the way.”

Spear will tell you that he a very private person. He does not like to talk about his contributions to the needy. He will tell you, “I am not a rich man financially but I am rich in every other way. If Jah provide I man with 10 cents and my brother needs 5 cents, I have to give it to him. It is the way of the most high.”

He just released a single “Mommy” which is getting a lot of airplay.